Standing out among all the cowboys with strangling contracts

We would like to tell you why we started installing alarm systems after many years of experience in the electronics and security business, and how you can save up to tens of thousands of euros by buying rather than renting a system.

With so many providers, it's often difficult to find the best one, and because of the high investment you want to be sure you're right, right?

This is where we, Alarma-AJAX.es, part of "Best-Alarm-System.eu" want to make a difference.

We call ourselves "best alarm system" for a reason and our goal is to provide the customer with the best security at a fair price together with the manufacturer Ajax.systems. Because it is precisely this fair price that many suppliers fail to provide. Everyone is entitled to earn a living, but making a profit of ten thousand euros on the sale of an alarm system during the time that the system is installed in your home is too crazy for words. Therefore, read the following text carefully to save on costs, but not on quality.

We supply Europe's best-tested alarm system with a 4-year guarantee,

for a one-off fee, without monthly charges.

How do we differ from other providers?

The disadvantage of renting is that you never become the owner of the products, so you keep paying every month to be able to use the system. If you stop paying, everything is removed again, and you are left unprotected. Smart of the seller, less smart for you.

Renting an alarm system is not wise

We think renting an alarm system is a waste of money. To make a comparison: You don't rent the sofa in your living room.

Now you can sit comfortably from 40 euros a month for a two-seater, or 60 euros for a four-seater.

This sounds strange, doesn't it?

You don't want to hire something that will last that long!

You rent products that are priceless and that you only need once.

A complete alarm system costs less than a decent couch and will last much longer. A decent alarm system like the one we offer in AJAX can easily function for decades.

In this example, we are assuming a system for inside the house, completely installed.

To buy: Average price between 499 and 599 euro once, depending on package choice.

You can buy a nice new car for that instead of an alarm system. Shame, right?

What persuades you to rent a system?

"Maintenance is included in renting".

That's right, but the only maintenance this system requires is changing the battery once every 5 years on average. This amounts to 60 cents per detector per year. In addition, the system checks itself every 36 seconds. In that case, an often-used rental price of 40 to 90 euros per month is not justifiable.

"Renting includes a control room with forwarding to the police".

This is only mentioned during the "sales pitch". But "in black and white" or on the website, it is suddenly no longer stated as such, and it only applies under very specific circumstances. The well-known small print of the contract, which you must have overlooked.

A modern system like Ajax warns all users simultaneously and fully automatically within 0.15 seconds via all connected smartphones, so that the right action can be taken immediately. This is without the intervention of an alarm centre which must first verify each alarm with the user before the police can be called.

Ask the salesman who is trying to sell you a monitoring station contract who will be called first when the alarm goes off. If he gives an honest answer, he should say that it is the resident, the owner of the system, in the first instance, and that the police may only be contacted by the monitoring station if it can look live and actually see that there is a break-in going on.

In all other cases, without verification, the police will not be called and valuable time will be lost before you yourself are informed by the monitoring station of a possible burglary at your home. After all, an automatic report from the alarm system itself to your mobile phone takes only 0.15 seconds. The average response time of an alarm center is a multiple of this.

It is therefore important that you can always verify an alarm with camera images in order to call the police. The cameras from Ajax can only be viewed by the control room when the alarm is activated. If you use another brand of camera, it can be viewed 24/7 by anyone you give access to, including the control room.

We make good security accessible to everyone

By saving on monthly costs, we make good security accessible to everyone.

But there are several reasons for the establishment of our company: We want to treat our customers the same way we want to be treated.

A better and faster service than any other, without monthly costs.

The security market has changed dramatically in recent years.

There are so-called Internet cowboys, often small companies that exist for a short time and sell equipment online at huge discounts. They present themselves as experienced consultants, installers and specialists. However, exactly the opposite is true. They think the margins are interesting, but have zero knowledge. They deliver the products by post and are not at home for questions, or install them without experience.

With low costs, these parties checkmate the serious providers and experience experts with discounts that service-oriented parties cannot offer. What is the problem for the consumer? The service, guarantee and knowledge that are necessary for installation are often not available.

Promises are made that may not or cannot be made, and when you need the company in an emergency, they are not there or do not (partly) live up to the agreements made. Prevent this simply by not looking at the price alone.

Deception with a low starting amount and ever-increasing monthly costs

Because we want to earn a living for everyone, we will not mention these companies by name, but you will recognise them from the TV adverts and also from the always intrusive people who are at your front door with the 3-year lease already in hand.

That is why we want to inform people and companies about the problem in the consumer security market.

The problem is as follows:

Many claims are made that are simply incorrect or have some form of deception in them. Also, an unjustified sense of security is sold because, through these misleading claims, customers have the idea that they are safe.

This is a misconception in the market and a counterargument needs to be made.

Claims that are not fulfilled

For example, one of the larger security companies in Europe claims that, after an alarm has been triggered, they allow the police to view the scene via Live View and then drive to the alarm with blue flashing lights. After several discussions with the police, we have been able to establish that this is not true. Moreover, this company only claims this to people at home in quotation discussions and hardly ever on their website. This makes it difficult to check for the government, for example. We know for sure that they claim this, because we have had them over to our house for an advice meeting. Without making a purchase, of course ;-). This is how they win over the customer: With untruths. And they don't stop there, either.

In addition, pay attention to whether the person who visits your home is a freelancer who works under a large company name or actually works for that organisation. Why is this important? A freelancer wants to enter into a contract with you in order to receive his or her commission. After that, you are no longer his or her problem. He or she will therefore do everything possible. He or she might as well just wear a company T-shirt. If someone is employed by an organisation, false claims are less likely to come up. This salesperson is bound by the core values of the company and will therefore be more inclined to inform the customer honestly and not just be there for a quick scratch in exchange for a nice chat.

The result is that the customer gets a misplaced sense of security after a purchase, and when there is really something going on, it can hardly be complied with. A big problem, we think. The internet is full of complaints about this type of company.

Because of the three-year contract, customers cannot leave when they want to, the equipment they have purchased is worth nothing without the expensive monthly subscription, and the subscription also becomes more expensive every year after the first year. It's all in the small print. But if there is so much small print, written by a clever lawyer, the consumer quickly loses count and then the 'security advisor', who is actually only in your home to sell, becomes the only one to get your answers. Then you are quickly sent from the well-known "box to the wall" if something is really wrong.

When it is only the sale that is in the spotlight and even before that people are lied to, misled, held back by strangling contracts and even the courts, various consumer associations and most importantly thousands and thousands of disgruntled reviews speak the truth, then a voice of opposition must be raised. And not only a counter sound, but also a solution.

And that solution is us:

We offer Europe's best alarm system without a contract and without monthly fees, but with 24/7 support and a four-year warranty.

Don't let anything be forced on you

People who have an alarm system that they have to pay for every month say that they were actually forced into signing up and frightened by the salesman at the door. Because of the constant pressure from these salesmen, many people do not know exactly what they are signing up for, let alone which system they are going to rent. Product explanation is secondary to the signature on the contract.

The salesman is not there for you, but for his own commission

Look beyond the aggressive sales parties. Look sceptically at what they offer. Is it possible? Does it make sense? Or is it all very nice, but do you sign a contract with which you are less happy after an incident? Do they have an easily accessible customer service in your own language, or only an accessible sales team? Do some research before placing part of your security with a company. Do they do it for the money, or do they do it for you? A healthy combination is not a disaster either.

Summary: Why our company is better for you, and your wallet

The above mentioned advantages are not unique to AJAX, but to our company.

So please be aware that there are also providers that offer an AJAX system with fixed subscription fees!

This is us, and this is what we do

The video above is in Dutch, but of course we also speak English.

With outdoor detection, we ensure that a burglar cannot touch your home without sounding the alarm.

Outdoor detection not possible for you? No problem, we install indoor detectors.

We install in a large part of Spain 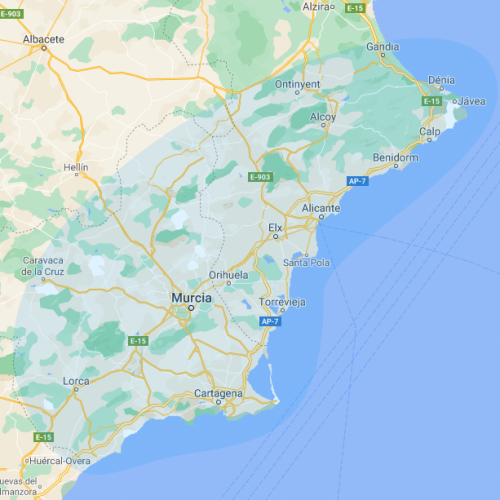 In this region, it is possible to have installations carried out by us.

Our head office is located in Torrevieja.